How Fast do Street Luges go?

If you’ve ever tried laying down on your longboard, AKA ‘buttboarding,’ you know that you can pick up some serious speed.

A street luge board takes it to the next level, with a streamlined design that makes it go even faster!

A Bit About the Hobby

Have you heard of street luge? This is not to be confused with the Olympic sport, ice luge.

Whereas ice luge involves a smooth sled, street luge utilizes a specialized, wheeled board. This looks like a mix between a sled and an oversized longboard. In fact, street luge started out on longboards. 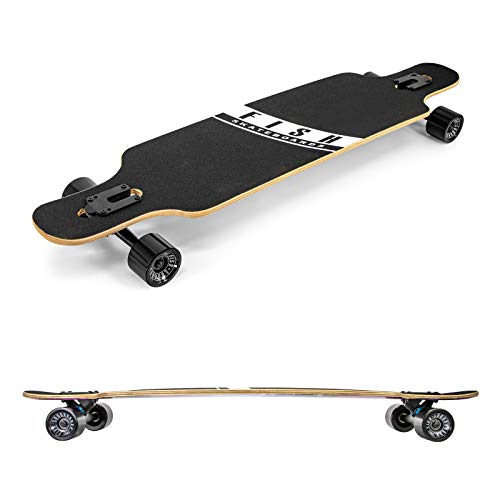 It was first called ‘buttboarding,’ which meant sitting or laying on the board. Buttboarders would then give themselves a push down a hill, picking up crazy speeds due to sheer momentum.

As you might imagine, this resulted in some pretty serious injuries, both of buttboarders and spectators.

To address the high level of risk, and offer more control, the street luge board came to be. At first, these boards were homemade and varied in their quality (and safety).

As they grew in popularity, they also began to be commercially sold, however! There are a variety of street luge boards – and all of the accessories – available today, if you take a look!

How Fast Do Street Luges Go?

This is thanks to the aerodynamic, streamlined design of both longboards (for buttboarding) and street luge boards.

Along with this, since the rider is laying down, they have a low center of gravity (and very little wind resistance).

The result? An adrenaline-pumping activity that you should only attempt with the proper know-how and gear!

If you thought 60-90 MPH was crazy, the record street luging speed is set at 101 MPH (by Damian Andrey of Switzerland) – an impressively high number!

A street luge board looks like nothing so much as a sleek sled. In reality, there are wheels underneath, and this board is built for paved roads.

The boards will typically cost $1000-$2000, which many say is well worth the cost for the expert design and reduced risk.

Some will also opt to make their own boards, as they are much cheaper. These can also be a bit riskier, however!

Because street luge involves such high speeds, it’s absolutely imperative that you have the proper gear.

This calls for a racing suit, racing gloves, a helmet, a face shield (that connects to the helmet), and booties (or something comparable).

Boots are specialized shoes for street luge, and they are both hardy, and exceptionally lightweight.

When it comes to the best street luge gear, this combination of speed-enhancement and durability is the goal!

As touched on above, street luge on public streets is, more often than not, illegal.

This is due to the high speeds that are quickly reached: from 60 MPH to a whopping 100 MPH. As a result, when street luging, you’ll most likely break the speed limit (which applies to all vehicles, not just those that are motorized).

On a public street, this already risky sport is the most dangerous.

There is simply too much chance of a collision (whether with a moving or stationary vehicle, mailbox, you name it).

What’s more, you can never be sure the surface will be safe, even, and free of gravel. For all of these reasons, finding a proper street luge course is often much wiser!

Is Street Luge an Olympic Sport?

It’s not, although its close cousin, ice luge, is quite similar. The primary difference between the two is that ice luge is undertaken on an ice course, on streamlined sleds.

Compared to street luge, it’s a bit safer, especially since you have to do it on a course (eliminating outside risks, such as obstacles, etc.).

So, as you can see, street luges go extremely fast.

So fast, in fact, that the hobby is fraught with danger! If you’re hoping to hit those high speeds, make sure you’ve got a quality board, protective gear, and the proper know-how!

Previous post : How is Buttboarding Different Than Street Luge?
Next post : How To Find Abandoned Places Near Me