Rock Tumbling Grit | All You Need to Know

Rock tumbling grit is essentially what polishes the rocks in your tumbler. It acts like sand in nature, wearing rocks away gradually. Only, in a rock tumbler, the process is much faster.

This is because rock tumbling grit is made of silicon carbide abrasive, which is far more effective than sand could ever be! The rapid and constant tumbling and vibrating motion also speed the process along.

It is necessary to use grit properly for the best results, however. For example, you will need to know the different types of grit, and the order they should be used in.

Read on to learn all you need to know! 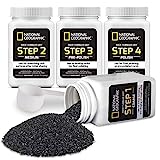 What is Rock Tumbling?

As you may already know, rock tumbling is the art of turning your average, rough-hewn rock into a polished gem that’s perfect for jewelry and general decor. This is achieved through the process of placing rocks of certain ideal sizes, types, and shapes into a rock tumbler. You then add the proper grit and some water.

Start the tumbler, and in a day to a couple of weeks, the rocks will be transformed. This serves to replicate the rock-smoothing process in nature, which occurs in lakes and rivers. In short, it’s nothing less than a wonder!

Of course, you have to use the right grit, among other things, in order for this to work. So, why does the grit matter?

Why Does the Grit Matter?

Grit matters because, as with sandpaper, a rougher or a finer grit will accomplish different things. Rough grits are perfect for smoothing down bumps, pits, and other major imperfections in the rocks.

Fine grits, on the other hand, are not as capable of smoothing bumps and the like but will smooth the remaining flaws that the rougher grits can’t reach as a trade-off.

Grits are often measured in microns, and most are 1-4 microns, from rougher to finer.

To tumble rocks properly, you’ll need to use about four different grits in four steps, if you want to achieve the best possible polish and luster.

If you use the wrong type of grit, instead of polishing the rocks, it can scrape them up and even cause them to crack… So, as you can see, the type of grit does indeed matter!

What is Rock Tumbling Grit?

Rock tumbling grit is made of an ultra-hard material known as a silicon carbide abrasive. It’s incredibly coarse, and the key to polishing rocks in a rock tumbler.

There are different grits, from coarser to finer.

How to Successfully Use Grit to Tumble Rocks

Tumbling rocks is fairly easy, but it’s not just tossing a few rocks into a rock tumbler. There is a certain process that must be followed in order to achieve the polish you desire, and this involves four steps and four grit types, from rougher to finer. See below.

When tumbling stones, you’ll want to start with a coarse 60/90 grit, which will serve to make the rocks much rounder. It will also eliminate the worst of the bumps, pits, and so on.

Most rock tumblers will use the coarse grit for about a week, at which point you can remove the rocks from the resulting slurry. What’s next?

The following step calls for a medium grit, such as 150/220; you can work up to this grit more gradually if you prefer, however.

The medium grit will remove the scratches left behind by the coarse grit, as well as any additional, minor bumps, pits, and the like.

After a few days in the tumble with medium grit, the rocks should be starting to look nice and shiny!

Now we’re to about 3-micron grit or 500-grit, which is fine grit. This is the second-to-last-step and gets rid of the final, minute flaws less on the surfaces of the rocks.

Lastly, you can go up to an extra-fine grit, or aluminum oxide powder. This will gloss the rocks and give them that final, pristine polish and dazzling luster!

Can You Use Sand Instead of Grit?

So, do you have to buy grit? Can you use sand or gravel instead? The answer is, unfortunately, no!

First off, it simply won’t work. This is because sand is softer than most rocks, and this means that it won’t polish them. Instead, it will break down.

Natural sand is also quite uneven and will likely scratch the rocks; clearly not ideal, either!

The Best and Worst Rocks for Rock Tumbling

When it comes to what sort of rocks to tumble, one of the facets that matter most is the hardness or softness of a given rock.

If a rock is too hard, it will simply not polish at all. It can even damage softer rocks in the tumbler.

If the rock is too soft, it will simply fall apart, or scratch and any sort of polish may not be possible.

So, it’s necessary to know what rocks are cooperative with ultra-hard rock tumbling grit.

Rock hardness is rated with the Mohs Hardness scale. If you want to know how hard a certain type of rock is, look up its number on this scale. The ideal hardness for rock tumbling is anywhere between 4-7.

The Rocks Most Compatible with Grit:

The Rocks Most Incompatible with Grit:

Where Can You Buy Grit?

You’ll have the most options and the best prices to choose from, and of course, clicking a button to purchase couldn’t be easier.

Now that you’ve learned everything you need to about grit, you can pick out some rocks, purchase some grit, and start your rock tumbler.

Remember: using the right grits in correct order is absolutely integral to achieving the best shine and luster!

Previous post : Is Eating a Hobby? (6 Food Hobbies)
Next post : How Hard Is It to Get Into 3D Printing?