What are Paintball Markers?

If you want to read more about paintball markers, check out the complete beginner’s guide to paintball.

Why Are They Called Paintball Markers?

Before paintball was a game, paintball markers were used by rangers and farmers to mark trees and cattle from a distance. It wasn’t until years later when a couple of friends were wondering who would be the best survivor; a countryman or a city man, that paintball was invented.

A team of country folk and city folk played against each other, and in the end, it was the countrymen who won.

Since the first design was used to mark trees and cattle, it was referred to as a marker and not a gun. To this day it is called a marker because it is a less frightening term than a gun, although both are used interchangeably.

How Do They Work?

This video slows down the process of how the inside of a paintball marker works. It shows each movement step by step so you can see how each moving piece contributes to the launch of a paintball.

This video is for a very specific type of gun, but for the most part, they work in similar ways.

What Are The Different Types of Paintball Markers?

There are three different types of paintball markers; pump, mechanical, and electronic. The main differences between the three are how the paintball ends up in the barrel and how the barrel is sealed.

To work a pump marker, you need to manually load the paintball by pumping a shotgun-like pump for every shot.

These guns do provide more of a challenge; having to manually load each shot before being able to fire, but a lot of players view this as an asset.

Players who use a pump marker have to shoot with more accuracy and make each shot count because they may not get the time for a second shot. These players will also save money on paintballs because their accuracy is much more precise than players who fire several shots to hopefully hit their target. 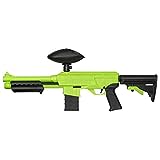 They don’t need a lot of maintenance either because they have a very simple design. Unless you have an air leak, all you need to do regularly is wipe down the outside of your marker.

Once a year, you can give your marker a tune-up by putting 3 drops of air tool oil into the Air Source Adapter (ASA), and dry fire until there is no more mist coming from the barre. Then remove the bolt and wipe it down, and clean the barrel with a squeegee.

If you keep your gun clean and oil your marker, you probably won’t ever have an internal leak. If you do, you’ll need to take your marker apart and change the O-ring.

Mechanical Paintball markers are the most used on fields. These types of markers are semi-automatic and fire one shot when the trigger is pulled.

Mechanical markers are great for beginners because they are affordable, easy to use, and are easy to maintain, but their drawbacks during gameplay might outweigh the advantages.

Mechanical markers need much higher pressure to fire a paintball: between 600-800 psi. By comparison, an electronic marker only needs 200 psi. This means that your air tank is going to empty a lot faster than if you were using a different type of marker. 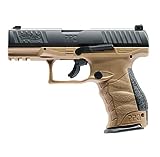 The increased pressure also makes these markers louder. This isn’t going to be helpful when you’re trying to discreetly take out your opponents.

If you need to replace an O-ring, mechanical markers are very easy to disassemble. And if any part stops working, replacements are inexpensive and are relatively easy to fix.

Electronic markers are automatic, and pulling the trigger can cause a burst of shots to happen at once.

Every time the trigger is pulled it communicates with the circuit board telling it to fire, which then activates the gun. Because circuit boards are programmable, you can change your firing options to fire a three-shot burst, fire automatically, or other firing modes.

Quite the opposite of mechanical markers, electronic markers are great for on the field, but their cost, general upkeep, and maintenance are much bigger drawbacks.

Regulators in the marker make sure that every shot is being fired at the same amount of pressure. This makes your marker much more accurate, but you also don’t use as much air.

Unless you are mechanically inclined, you’ll have a difficult time repairing your marker. Many players who use an electronic marker opt to take theirs to a professional for repairs because they find it too challenging.

A paintball marker is the exact same thing as a paintball gun. The term marker came from its original use as a way to mark trees and cattle from a distance.

There are three main types of paintball markers, each one with its pros and cons, some that are great for beginners, and some that help you become a better player.

Hopefully, this guide has helped you learn what a paintball marker is, how they work, and what one is right for you.